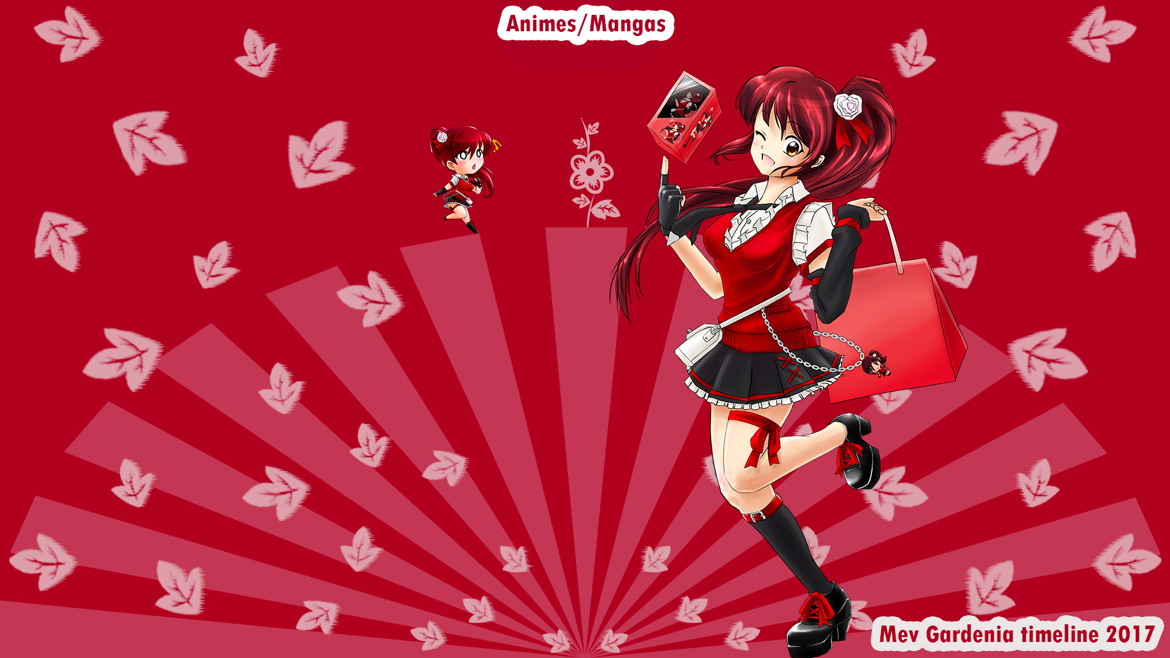 In 2017, Mev Gardenia (anime / manga style) was born in Japan. This girl is a student passionate about the collection of figures. Although she is devoted to her friends, she tends to become overexcited as soon as she sees a collector product and is ready to do whatever it takes to get it, regardless of the price to pay for it, does not fail to exasperate his entourage.

Mev will see her destiny shattered during the period of cherry blossoms in Japan, better known as Sakura. One fine day, on returning from school, a wind began to blow terribly, which frightened the young girl. Despite the fear, a wonderful show was offered to her with thousands of flower petals swirling around her.

There was only one plant that did not move in front of the powerful squalls. Mev approached her, captivated by the beauty of the flower that pointed at the top of the stem. It was a Gardenia and Mev did not lose a minute to pick the latter and hang it on his hair. At the same time, the storm faded and the young woman was able to continue on her way home. Spending all her money in the purchase of goodies and collector figurines, Mev checked her mailbox when she arrived. She discovered a mysterious package from Derive Figurine. This shop being her favorite, it was without any suspicion that she carried the parcel in her room in order to open it.

At the bottom of the mysterious package was a simple map. Mev was initially disappointed to see such a large cardboard for such a small object. As she looked closer, Mev grabbed a big smile as the card represented her! At the same time, a strange phenomenon occurred ...

The card and its flower of Gardénia began to shine strongly! Mev closed her eyes as the light dazzled her. When she opened them again, everything had changed and the girl was no longer in her room.

Even her clothes had changed and she was now dressed in a white blouse and a very elegant red tank top. She also wore a mitten on one side, a sleeve on the other, and a small skirt and black shoes that made it even better. If she seemed to love her new outfit, she was especially surprised to see a box of figurine in her effigy that she could control with her left finger. The most astonishing thing remained, however, that unknown place where she was. In spite of green plains, a soothing blue sky and a radiant sun, this world was counting on welcoming it in a hostile way and this is what it was not long to discover. Mev noticed a small light on the ground and approached. It was the card to her effigy that she had found a little earlier. At his back was written:

« You are in Gardenia Imperialis. An artificial world created from scratch. Yet people live in a critical situation. An evil creature is diriring this place and thanks to your Gardenia flower, you are the only one able to do something. Your potential is surely active now that your power has awakened. Know that the flower of Gardenia offers you incredible skills but I could not tell you which ones because they are defined according to what you have deep inside of you.