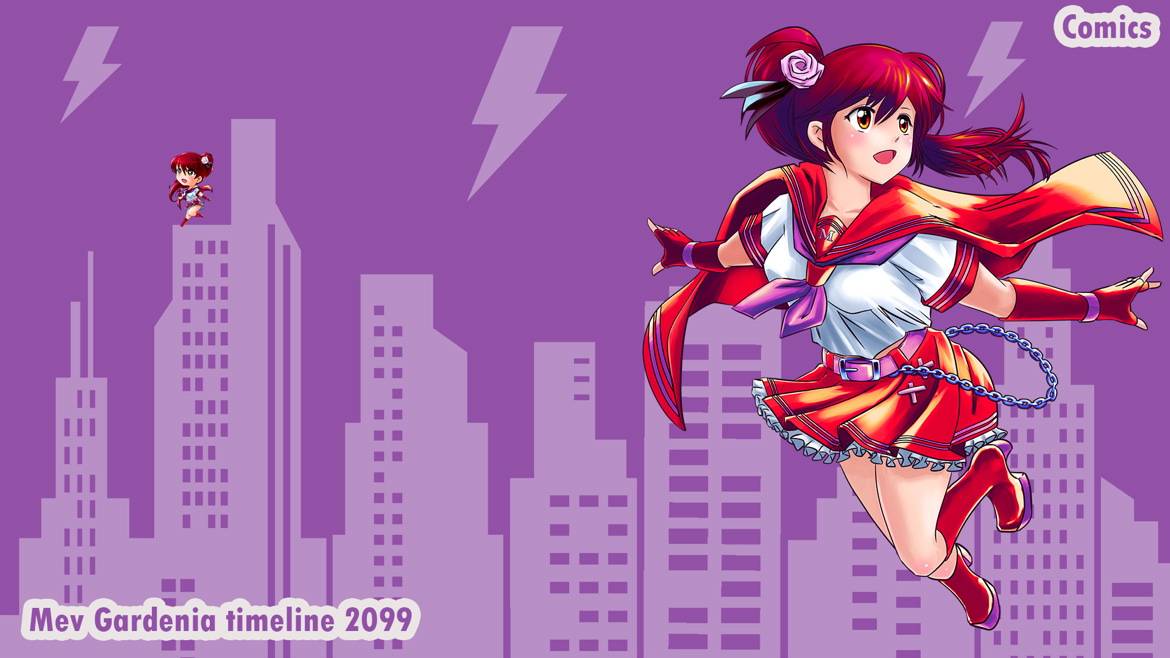 In the year 2099, Mev Gardenia (Comic) was born in the United States of America and she only hopes to become a super heroine. Fascinated by the stories of superheroes, the girl of this futuristic era has developed a sense of oversized justice.

Like other Mevs, she was raised by adoptive parents and this fad for superheroes worried them from an early age. Their daughter chained small accidents and minor injuries but her parents always noticed that she was able to heal faster than other children.

As a teenager, Mev was increasingly feeling the need to become a heroine and to help those in need. At that moment, she noticed a strange behavior, rushing into a small alley for no reason.

Seconds later, she saw a group of individuals taking the same direction. Without thinking and guided by her sense of justice, she rushed innocently down the street.

A terrifying macabre spectacle appeared in the eyes of MEV aged only 16 years. The bodies lay on the ground, a strong smell of blood hovered in the atmosphere.

When Mev raised her eyes, she found herself in front of the man who had orchestrated the massacre. A few seconds sufficed her to understand that justice could sometimes go beyond it and that it was not always possible to save people in distress ...

During this time, the criminal had taken advantage of Mev and he raised her with his arm. She was paralyzed by fear and the the horror of the scene. As it began to rain strongly and the thunder made a deafening noise, the man whispered in her ear that he did not think he had the pleasure of eliminating a child in such beautiful weather.

The assassin raised his fist furiously towards the sky to load it with electricity. It crossed it on all sides. While taking a certain pleasure, he squeezed Mev from his right fist in an extremely violent way. This being who drew his energy from lightning did not resemble any human.

The young Mev could barely move, but turning her head lightly, she saw her own blood spilled over the walls of the alley. The man then let her fall to the ground and went away.

Mev lay on the floor in a pool of blood, left for dead by the unknown, when she was dazzled by a bright white glow. In reality, it was the flower of Gardenia that she had always owned that had begun to shine strongly. Several hours later, Mev regained his strength, his wound had finally healed completely.

On returning home, she found a uniform and a cloak on her bed, accompanied by a letter from her real parents who wanted to give her this gift; this letter reminded one of the link between the flower gardenia that she had in her hair and the flower that had saved her life today. Troubled, she could not remain indifferent and decided to use this uniform as a tribute to her biological parents.

Despite the shock of the event and the terrifying fear, Mev wanted to act, to find out who was the author of the massacre and to know the identity of her real parents.